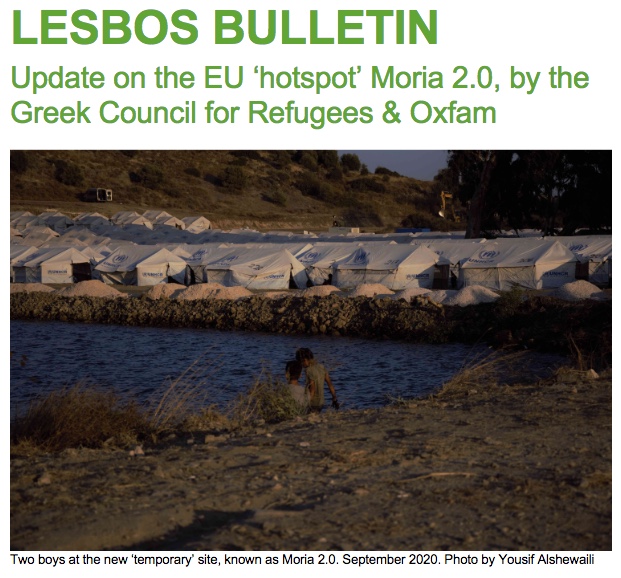 « Moria 2.0’ represents another missed opportunity by Greece, the EU and EU Member States to address the underlying causes of a 5-year reception crisis experienced on the Greek islands » (Lesbos bulletin, 21.10.20, p.1)

Conditions in ‘Moria 2.0’ camp are abysmal, say GCR and Oxfam

The new temporary camp on the Greek island of Lesbos is even worse than the original Moria camp, with inadequate shelter, hardly any running water, limited healthcare services, and no access to legal aid, said the Greek Council for Refugees (GCR) and Oxfam in their latest ‘Lesbos Bulletin’ news update. The organisations call for the immediate relocation of all people seeking asylum in Lesbos to adequate accommodation on the Greek mainland and in other EU countries.

The new site was built on a former shooting range after a fire destroyed the EU ‘hotspot’ camp of Moria in September. Almost 8,000 people – most of them families with children – now live in tents not fit for winter, some of which are just 20 metres from the sea. When Oxfam conducted a rapid protection assessment at the end of September, the organisation identified numerous risks to the people living in the camp including limited access to food and healthcare, insufficient measures against COVID-19, as well as no drainage and sewerage system on site.

The tents lack a solid foundation and provide no protection against the weather including against strong sea winds and rains. Food is only provided once or twice per day, and according to residents, there is not enough, and it is of bad quality. Due to the lack of running water, many people wash themselves in the sea – this is particularly risky for children who could drown or get infected by wastewater from the camp. Due to the lack of toilets and showers as well as insufficient lighting in the new camp, women are exposed to increased risks of sexual and gender-based violence.

“When Moria burnt down, we heard strong statements from EU decision-makers saying ‘No more Morias’. But the new camp is rightly dubbed ‘Moria 2.0’.

“The EU and Greek response following the Moria fire has been pitiful. Rather than relocating asylum seekers to proper shelters where they would be safe, the EU and Greece have opted for another dismal camp at the external borders, trapping people in a spiral of destitution and misery.

“This approach is echoed in the new EU migration pact: it proposes more camps at Europe’s borders to screen people seeking asylum. Experience shows that it is unlikely that resources will be invested to ensure a fair and efficient procedure. This means ordinary people using their legal right to flee conflict and human rights abuses will remain in limbo and despair, out of sight of the European public and politicians.”

“We are deeply concerned about living conditions in the new camp and urge Greece to relocate immediately everyone from the island. Though the government’s plan to relocate all residents by Easter is welcome, it fails to address the squalid conditions in the camp, which will deteriorate in winter.

“The government plan also does not provide a durable and coherent integration strategy, in order to avoid simply transferring a policy-made problem from the island to the mainland. This also means that European governments need to work together and ensure effective relocation across member states for those seeking protection in Europe. The practices and policies that led to the failure of the EU ‘hotspot’ approach, both in Lesbos and the other Aegean islands, should not be replicated and consolidated in the EU’s future asylum system, which seems to be the case with the current proposals for a new EU migration pact.”